I Speak, Therefore I am

Learning English is no doubt very important for students in non-English speaking countries. Having a good command of the English language increases their chances of getting jobs in multinational companies and the opportunities of relocating abroad. Hong Kong, a city where East meets West, its multiculturalism characteristic is reflected in Hongkongers’ use of language. In the streets of Hong Kong, it is very common to hear locals speaking a mixture of Chinese and English words and phrases in one sentence.

However, how do students in Hong Kong perceive the use of English in the classroom and the society? Is the foreign language being perceived as a threat to the Chinese culture and traditions? These are some of the questions explored in a research study by Dr. Anna Tsui Po-yung and Prof. Ngo Hang-yue at The Chinese University of Hong Kong (CUHK) Business School.

“CUHK was first set up to cater for Chinese middle school leavers and those who had arrived from mainland China in the late 1950s. Traditionally, a laissez-faire practice was adopted that allowed teachers and students to determine the medium of instruction in the classroom. Most of the teaching at CUHK was conducted in Chinese, which was enshrined in the university ordinance,” says Dr. Anna Tsui, Senior Lecturer in the Department of Management at CUHK Business School.

Established in 1963, The Chinese University of Hong Kong (CUHK) literally means ‘Chinese-Language University’ in Chinese. The university decided to offer more courses in English in the mid-2000s, following the trend of globalization and thereafter, controversies arose within the campus.

“The management perceived a need to change the language policy that would follow the ‘universal trend’, says Dr. Tsui.

“Facing globalisation, education reforms and increasing competition then, CUHK management decided to enhance the competitiveness of the university. Apart from encouraging and promoting excellence in research and teaching, and collaborating with overseas and mainland institutions, the university also recognized the importance of internationalizing the university, increased the admission of international students and encouraged the establishment of exchange programmes,” she explains.

However, the announcement of the new language policy was met with anger from some students and other stakeholders such as the alumni who emailed the school management and held campaigns questioning the legitimacy of the language policy. Despite the students’ oppositions, the policy was implemented and more courses have been taught in English since then.

In the study, the researchers were particular interested in how CUHK students perceived the importance of English-medium instruction (EMI) in relation to their career, learning, internationalization and preservation of the university’s tradition. They were also curious about the relationship between the identities of the students and their perceptions of EMI policy, as well as their academic performance and satisfaction of the university.

According to the results, students of different backgrounds had different perception of EMI across different dimensions. Although students did not consider English as a form of neo-colonialism, they generally acknowledged the importance of EMI in career developing and internationalization.

“Senior students perceived greater importance of EMI for internationalization than did their junior counterparts. Students of master degrees, exchange students or students with a mother-tongue other than Cantonese showed greater support for EMI in the three dimensions of English for learning, career and internationalization,” says Dr. Tsui. “It may be that these students have had more experience joining overseas exchange programmes and/or meeting people of different nationalities.”

“Hong Kong has long been an international and cosmopolitan city. A knowledge-based economy demands a solid command of both English and Chinese.” – Dr. Anna Tsui

In the study, the researchers noted that the identity of individual students has an influence on their perception on EMI, as the findings show a major difference between the students with local and global identities.

According to the study, students with local and global identities acknowledged the significance of EMI for career and learning but those with local identities did not recognize the significance of EMI for internationalization. In addition, students from science, engineering, social sciences, business administration and law disciplines were more supportive of the EMI policy than those from education and medicine faculties.

“This reflects a more pragmatic view of reality by the former group, who might believe that EMI would eventually benefit them upon graduation and joining the job market. For the education and medicine disciplines, although the core principles and fundamentals are probably global, their practical applications might be more local,” explains Dr. Tsui.

For the effect of EMI on learning, students from the arts, education and social science faculties showed a different mentality compared with those from science, engineering, law and business administration faculties. The study reveals that the former were more inclined to treat English as a “threat” to the tradition of the university and the vitality of the Chinese language of culture whereas the others seemed to ignore such issue.

“This variation may be due to the nature of knowledge construction and the language sensitivity of the different academic disciplines. The responses of the business administration and law students are probably due to a practical orientation towards EMI,” says Dr. Tsui, adding that interestingly, no effect was found regarding the students’ academic performance, which suggests achieving second-language proficiency should be done before entering the university.

As the study shows although some students held positive attitudes towards EMI, other students from different disciplines might have reservations; hence, policy makers should not consider implementing a ‘one-size-fits-all’ language policy but to consider making disciplinary adjustments.

“For subjects in the natural sciences, EMI classes can be continued. For language- sensitive subjects, deep-level learning is best conducted in one’s native language. In such case, English could be employed as a supplementary language in parallel with Chinese. Teachers should be granted the flexibility to choose certain languages for pedagogical purposes and specific groups of students,” explains Dr. Tsui. “In other words, there should not be a clear demarcation between ‘English medium’ and ‘Chinese medium’ instruction in the classroom.”

The study also highlights that the students who value EMI for internationalization and possess strong global identity showed higher intention on migration, which may eventually lead to the ‘brain drain’ (loss of talent) situation in Hong Kong. Besides urging policy makers to develop ways to retain talents, Dr. Tsui is positive about the language proficiency development for Hong Kong students.

“Language and identity are strongly intertwined. It is worthwhile to understand the cultural identity of Hong Kong people in relation to the government’s language policy.” – Dr. Anna Tsui

After the British colonial rule of more than 150 years, Hong Kong’s sovereignty was handed back to the People’s of Republic of China on 1 July 1997. In early 2016, Hong Kong had a population of over 7.3 million of which 94% were Chinese. Most of the people speak Cantonese. Before the change of sovereignty, English as the medium of instruction was used in the majority of secondary schools and the universities, although the choice was generally left to the individual schools. In 1998, the government recommended mother-tongue (Putonghua) education in most of the primary and secondary schools. Unfortunately, the policy change caused strong emotional reactions from every sector of society and the controversy continues. After a decade of controversy, the government has succumbed to societal pressure and released a revision of the language policy known as ‘Fine-tuning the Medium of Instruction for Secondary Schools’, effective from 2009/10.

“Hong Kong has long been an international and cosmopolitan city. A knowledge-based economy demands a solid command of both English and Chinese. In Europe and Asia, most students receive substantial exposure to English during their primary and secondary education. This is not the case in China, South Korea or Japan,” she says. “In Hong Kong there are many multinational corporations which employ a large number of workers. The ability to speak English well is an advantage for gaining employment at a multinational company.”

Since the handover, the identity debate of Hong Kong people has never settled. As reflected in the polls by the Public Opinion Programme conducted by HKU since 1997. In 2019, the number of Hong Kong people identifying themselves as “Hongkonger” has reached the highest percentage (52.9%) as compared to being Chinese (10.8%).

“Language and identity are strongly intertwined. It is worthwhile to understand the cultural identity of Hong Kong people in relation to the government’s language policy,” says Dr. Tsui.

“With the rise of China, English, Cantonese and Putonghua may co-exist making Hong Kong a linguistic capital which is a benefit for Hong Kong’s students,” she adds. 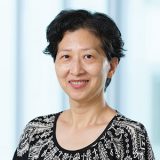 Students’ perceptions of English-medium instruction in a Hong Kong university