The Reshuffling of Li Ka-shing’s Empire: The Interplay between Business and Politics 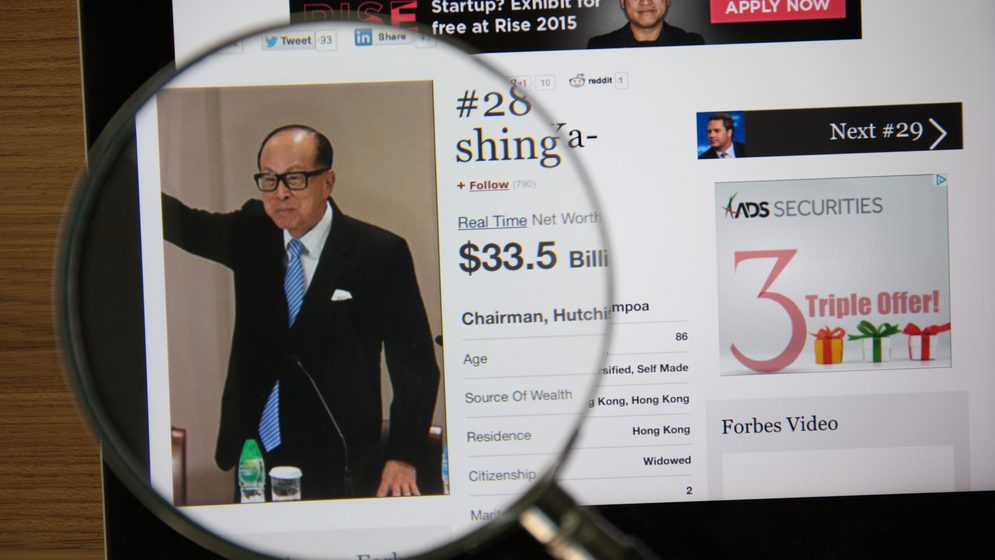 Hong Kong tycoon Li Ka-shing’s business overhaul plan has received much media attention in recent months. Why has Asia’s richest man  chosen to reshuffle his business at this moment?

After the Hong Kong stock market closed on January 9, billionaire Li Ka-shing announced his largest-ever corporate reorganization plan: Cheung Kong, the flagship property company of Li’s corporate empire, will take over Hutchison Whampoa. The enlarged group will then be split into two new listed companies—Cheung Kong Hutchison and Cheung Kong Property. It is worth noting that these two new companies are incorporated in Cayman Islands, which suggests that Li’s base of incorporation is shifting from Hong Kong to the Cayman Islands. Why did Li Ka-shing make such an arrangement? The reasons can be manifold:

Li Ka-shing’s is a classic “from rags to riches” story, representing the Hong Kong Dream. He is dubbed by the local media and citizens as “Superman” because of his investment prowess. However, nothing stays the same forever: In recent years, the attitude of Hong Kong people toward Li Ka-shing has turned negative; some activists even criticize him as a profiteer. Why has people’s attitude changed? The widening income gap in Hong Kong can be an important explanation. In 2012, Hong Kong’s Gini coefficient rose to 0.537, reaching a record high in the past 40 years. At the same time, according to an index of crony capitalism released by The Economists in March 2014, Hong Kong ranks No. 1 on the list, which indicates that nearly 80 percent of Hong Kong’s wealth are controled by tycoons. The widening wealth gap has led to people’s frustration and fueled their anger at the plutocrats, including Li Ka-shing. In April 2013, hundreds of port workers gathered outside his corporate headquarters at Cheung Kong Center in Central and went on a strike. They held placards, demanded better pay and shouted slogans against Li. The protesters also called for a shopping boycott at all the retail outlets in Li’s corporate empire. Changes in the surrounding business milieuaside, Li Ka-shing has his own reasons and considerations for revamping his corporate structure from the perspective of family business succession.

As we know, Li Ka-shing is skillful in building relationships with the government. In both Hong Kong and Mainland China, Li has built up a particularly close relationship with the governments. As Li’s special assets, these networks are important advantages to his corporate empire, but how to transfer these intangible assets to the second generation can be a big challenge to his family business. Undoubtedly, the networks with the governments are not unbreakable. With the change of Central Government leaders, all these things would become unpredictable. On the other hand, compared with his father, Li’s elder son, Victor Li Tzar-kuoi, who is believed to be the family successor, is quite low profile and not that familiar with Hong Kong and mainland markets. His main “battle fields” have always been the European and American markets. As such, it is unclear whether Victor will be able to control and master the Hong Kong and Mainland China markets without his father’s guidance and help. Shifting the business to markets outside of Hong Kong could be a safe choice for continuing Li’s corporate dynasty.

In addition, since the outbreak of the Occupy Central Movement last October, the future prospect of Hong Kong remains unclear. On the one hand, if the Central Government begins to interfere with Hong Kong’s business affairs, this would post risks on the city’s rule of law. In light of this, Li naturally feels the need to reduce his business risks. On the other hand, the Occupy Movement may fuel Beijing’s desire to accelerate its plan to raise the status of Shanghai as a major international financial center, replacing that of Hong Kong. In that case, Hong Kong would become less important to the Chinese economy than in the past, which in turn would affect the city’s economy. Last but not least, as the anti-corruption campaign in the mainland deepens its impacts and broadens its reach, the relationships between Hong Kong tycoons and influential mainland figures would become a time bomb. Having an acute sense of how these developments may impact his business, Li has every reason to make corresponding changes in his corporate empire. Otherwise, these issues would become roadblocks for his business succession.

Furthermore, the reorganization is also a preparation for his son’s succession. As a veteran executive in Li Ka-shing’s group, Canning Fok, director and chair of numerous management boards in Cheung Kong and Hutchison Whampoa, is believed to be behind most of the group’s large-scale deals. Both the Cheung Kong and Hutchison Whampoa companies are under Fok’s management. But he is already in his sixties. Would the group fall into chaos once he retires? It is a critical issue that Li Ka-shing has to think about. To that end, Li also needs to reorganize the group business and simplify its structure, making it easier for his son to take over in the future.

The Chinese society has a long history of undervaluing private business and entrepreneurs, so much so that entrepreneurs have been in a highly insecure position and worried about their destinies. How to protect their business is therefore something they always bear in mind. Li Ka-shing is no exception. For him, the relationship with the government is a double-edged sword. He benefits a lot from his political ties, but now the time has come to cut them off.

Li knows very well that the increasing public hatred for him has to do with the traditional Chinese mentality that rich people who engage in rent-seeking behavior with the government are immoral and heartless. Every time he meets Central Government officials, he would come under excruciating scrutiny by the local media and citizens. It is ironic that the political connections Li established have constrained his company’s innovation and potentials. Li Ka-shing has created a corporate empire that monopolizes Hong Kong’s property market, electricity supply and telecommunications industry, but he has failed to create a company of greatness, like Apple and Microsoft, which have revolutionized a whole industry. The story of Superman Li has been a legend in the Chinese-speaking world. His corporate empire is a product of the political and business environment made possible by the crossing of the East and the West in the city of Hong Kong. As a benchmark for Chinese family businesses, each movement made by his empire, including family business succession, would have tremendous and profound influences in the region.