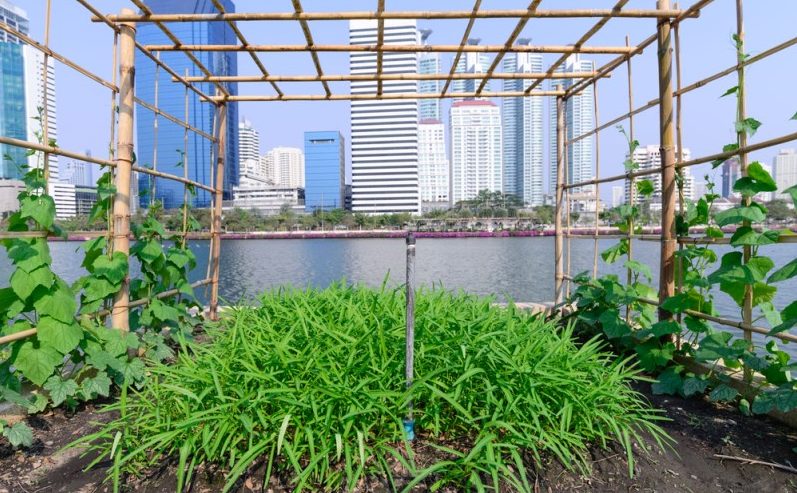 While working for a digital marketing agency under the WPP umbrella, Bjorn Low made good money handling big corporate accounts such as HP, SAP, and Johnson & Johnson. He did well and found himself transferred to the London office to work on the account of the diamond company, De Beers.

“It came to a point where I worked really hard and climbed the ladder, but I started to question myself, ‘Why am I doing this?’ says Low, recounting his decision to quit the advertising industry to learn about organic farming. “There was something about food that I didn’t know. Growing up in Singapore, the exposure to agriculture and gardening is very limited.

“I started working on organic farms in Scotland, Spain, Japan, just to see different models of organic farms and how they worked and how such farms stay financially sustainable.”

He adds: “I was planning to stay in the UK to start a farm. I went to agricultural college in Sussex and got my diploma in agriculture. But I had this nagging feeling to come back to Singapore. I had the opportunity to see the movement to change the agriculture industry in the West. Singapore being an advanced country, farming had been relegated in terms of importance. I wanted to come back and see what I could do to change that.”

The result was Edible Garden City, an urban farming social enterprise that has gone on to build rooftop gardens in many parts of Singapore from shopping malls to office buildings. But for the exorbitant cost of building a traditional farm, things might have worked out differently for the 36-year-old.

“I went to Kranji to look for a farm,” he recounts to the audience at a recent SMU Wee Kim Wee Centre CEO Talk, referring to the Northwestern part of Singapore where some farms operate. “Once I got to the plots I realised there were so many barriers. You have to be close to a millionaire to be a farmer in Singapore. You had to pay thirty years of rent upfront for the plot of land, and if you had no prior track record you’re unlikely to get that plot of land. I was quite disappointed.

“I started walking around the city [and walked past] the Artichoke restaurant,” Low says of what would become Edible Garden City’s first restaurant client. “I met another Bjorn, Bjorn Shen who was trying to grow some herbs outside his restaurant but he was failing miserably. I sat down and had a chat with him and decided to do something together. We used his patio and together we started producing food and herbs.

“We realised that when we talked to people about farming, a lot of people had negative connotations about farms: messy, dirty, smelly etc. We tried to create a nice package that was aesthetically pleasing, and we continued to build gardens.”

Making a Difference–and a Profit

Low has since expanded operations, hiring adults with autism and Down Syndrome in line with its mission as a social enterprise. “For autism spectrum disorder patients,” Low explains, “if you harness their abilities, they’d really love this type of work: repetitively sow, harvest, sow, harvest. They find comfort in repetition.”

“If I want to be very productive, I have two routes: I can deploy robots and A.I. to become really efficient, or I can go the social route by working with marginalised groups who don’t have jobs but can perform relatively well. I may lose some productivity and efficiency, maybe 20 percent, but it’s a cost somebody has to pick up. We are picking that up as a social enterprise.”

“We are carrying that cost to ensure that this model works for the future. For us it was a conscious decision to not deploy robots or too much technology to overtake jobs that could otherwise be filled by marginalised folks,” he adds.

Despite the good intentions, the need to become financially successful and sustainable is imperative. When asked how he convinces investors to put money into Edible Garden City, Low says:

“We have been deciding what kinds of investors we seek, be they the PE type or social impact type of investor. Both types of investor are interested in us because urban farming has just started in Asia, unlike in the U.S. where it is more matured. The last round of funding that was raised by Plenty was US$200 million in Series B money from Softbank. In Singapore, we’re at the very beginning but both sides are interested,” he says.

“But our numbers are sustainable. As long as the system works, and you scale, the revenues follow. Our margins are high, at about 20 to 30 percent. So the numbers are there, and we are focusing on crops that are higher in value. If you’re just growing bok choy, caixin and kalian, your competition comes from farms in Malaysia and Thailand. Instead, we grow unique stuff and market it, create a story behind it. For example, what we supply to restaurants are microweeds, edible flowers, and we grow that here.”

Singapore currently hosts no less than 10 urban farming companies, a big change from five years ago when Edible Garden City was one of only two in the business.

“When we started, urban farming was non-existent, and we wanted to build the industry; today it is built,” Low reflects before joking that “my work is done and I can retire.” With regard to his latest venture, Citizen Farm, which is described on its website as “a closed-loop urban farming system that integrates natural systems with modern technology,” the former marketing man sets out his vision for the industry.

“When we set up Citizen Farm, we took the different farming technologies of smaller players who were testing their techniques at home, giving them a space to scale their systems. It’s an incubator of sorts. We’re not really in the production game, our role is very different. If we continue to do that, try things before anyone else, then we’ll always stay ahead,” Low says.