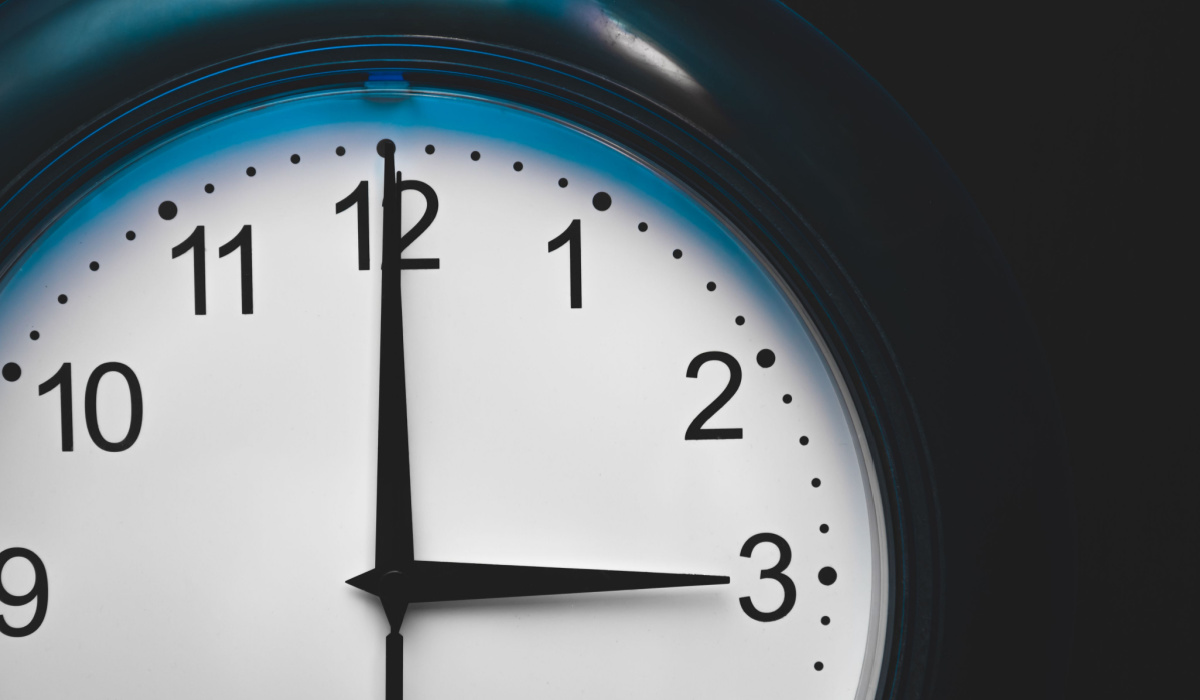 In a world that has been rocked by successive financial scandals and where the emergence of highspeed trading means fortunes can be made or lost in the blink of an eye, the quality of a company’s earnings has become an attribute that has become increasingly important. Market watchers and investors, both big and small, are ever seeking ways to peer through the litany of accounting tricks that firms may have at their disposal to “dress up” their financial performance and boost stock price.

Joining this is a new study conducted at The Chinese University of Hong Kong (CUHK), which sought to look at whether differences in timing of market disclosures by companies from one announcement to the next can offer clues to investors about how clearly a firm’s reported earnings reflect its underlying business performance.

“The propensity for a firm to deviate in the timing for making quarterly market announcements appears to be a tell-tale sign of the quality of its subsequent full year financial earnings results.” – Prof. Angie Wang

The paper Intraday disclosure timing deviations and their implications for financial reporting, was written by Angie Wang, Assistant Professor at the School of Accountancy at CUHK Business School, in collaboration with Prof. Jennifer Wu Tucker at the University of Florida. It found that firms which deviate from the timing of its announcements from their stated preferences or usual practices are also more likely to try to make use of accounting rules to present their financial performance in a positive light.

When a company is considering releasing information to the market, they typically do so in one of three windows. They can either release information before the market opens (usually at 9:30am), during the normal trading hours of the market (usually between 9:30am to 4pm), or after the market closes (after 4pm). The researchers note that this is usually a well-thought-out decision, as the different windows are all associated with differences in characteristics such as trading volumes, the speed with which buyers and sellers agree on a price (called price discovery), trader types and investor attention.

The researchers chose to focus on the pattern of when a company releases new information to the market, rather than which of the intraday windows it uses to make disclosures. Prof. Wang notes that sometimes firms may deviate from their usual timing in making market disclosures either for opportunistic reasons (such as by making an announcement during a less-expected window to reduce attention) or for benign reasons (due to limitations in the company’s accounting information system requiring additional time to gather information).

“If the deviation of a firm’s earnings announcement timing can be correlated with the quality of the subsequent financial reporting, then investors could use the former as a signal, which is easy to obtain, for the latter,” says Prof. Wang.

To go about their research, Prof. Wang and her co-author first looked at the timing of earnings announcements of public companies in the U.S. from 2007 to 2018. During the period, they found that 41 percent of earnings announcements by companies were made before the market opened, 8.5 percent during trading hours, and 50.5 percent after the market had closed. They then sought to compare whether a firm used the same intraday window to release their earnings during two consecutive years. For each year, they looked at a firm’s full year earnings announcement, as well as for the results for the next three subsequent quarters. They found that, when releasing information to the market, firms were largely consistent in sticking to the same intraday window from one year to the next.

They then sought to measure the quality of the same firm’s earnings by looking at its level of discretionary accruals. A firm’s accruals reflect the judgement by its management about how to recognise cash flow within different accounting periods to best reflect its underlying economic performance. Discretionary accruals represent the portion of a firm’s total accruals which are not stipulated by regulators, and where a company’s management can exercise its own judgement in assigning onto one year or the other. It’s a measure that is widely viewed as a proxy for earnings management, where firms use accounting techniques to produce financial figures that present a company’s business and financial activities in a positive light. 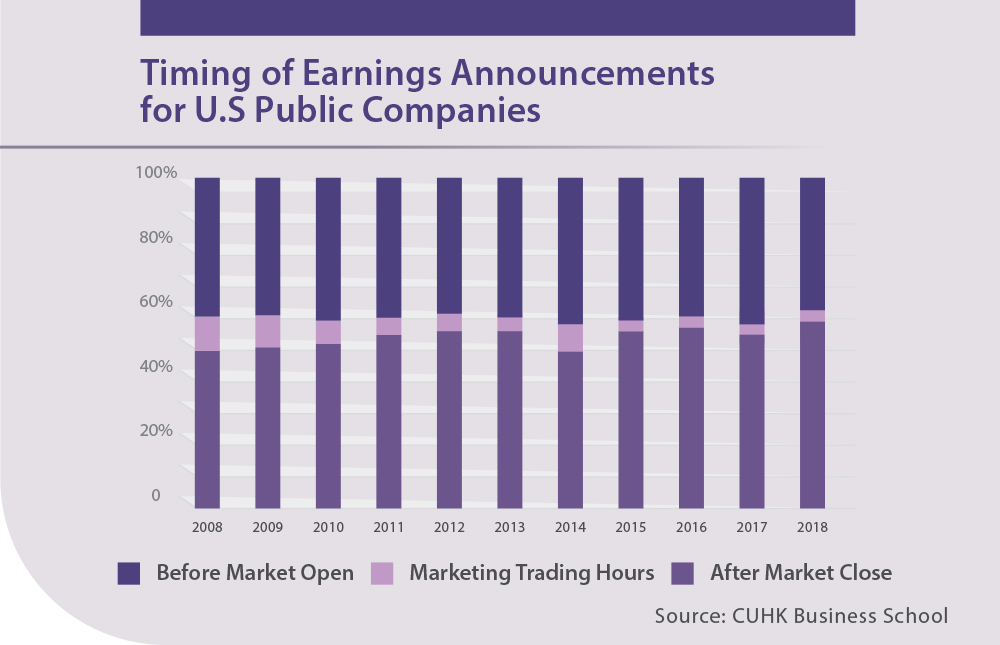 “We find that firms with greater deviations in terms of which of the intraday timing windows they use to make earnings announcements during a fiscal year also tend to report larger magnitudes of discretionary accruals for that year,” says Prof. Wang. Further analysis also confirmed that deviations in announcement timing could be both associated with efforts by a company’s managers to intentionally embellish reported financial performance, as well as weaknesses in a company’s accounting systems leading to delays in the information gathering process.

“Either way, our results suggest that the propensity for a firm to deviate in the timing for making quarterly market announcements appears to be a tell-tale sign of the quality of its subsequent full year financial earnings results,” she adds.

What’s more, the researchers say the results of the study suggest that investors did not seem to immediately and fully recognise such deviations in intraday disclosure timing as the tell-tale signs for the quality of financial reporting.

The researchers reasoned that if investors were aware that inconsistency in market disclosure timing was associated with a company producing earnings reports of a lower quality, then this information would become priced into the market and this signal should not be able to predict subsequent stock returns.

However, Prof. Wang and her co-author found that firms which were less consistent in the timing of their market announcements significantly underperformed their peers. They found that if investors employed a trading strategy involving shorting (which involves selling off shares with the intention of benefiting from a fall in its price) a firm which was inconsistent with the timing of its market announcements, and taking a long position (by holding a stock) in another which was consistent in announcement timing, then they would on average earn a significant and positive return of 3.7 percent over three months, 2.5 percent over six months, and 4.0 percent over 12 months.

Even controlling for variables such as firm size, the ratio of its book to market value and stock price volatility, investors would still be able to earn a return of 1.3 percent, 1.8 percent and 2.7 percent, over three, six and 12 months, respectively. “These analyses suggest that investors do not immediately and fully recognise that deviations in a firm’s timing of its market announcements as the easy-to-obtain signals that they are,” Prof. Wang adds.

The Importance of Timing Consistency

Finally, Prof. Wang notes that the new study contributes by drawing attention to the importance of consistency in disclosure timing and what it can say about either a company’s senior managers or the effectiveness of its accounting systems. The vast majority of research on the timing of how firms release information to the market often focus on which of the three intraday windows are used, while ignoring how they fit into a bigger pattern established over a longer period. The result is that they often conclude that corporate managers that release information outside trading hours often do so in an attempt to hide bad news when markets are closed.

Can Companies Boost Innovation by Tweak their Accounting Policies?

“Nowadays, some of the biggest and most prominent publicly-listed companies in the world, from Apple to Nike, release information to the market only outside of normal trading hours, so it’s becoming difficult to argue that this is the reason for it,” she says. “On the other hand, by redirecting attention to a firms’ consistency or deviation from its disclosure timing patterns, we hope this knowledge can help investors better understand the nuances of managers’ use of discretion in their operational decision-making and the effect it can have on capital markets.” 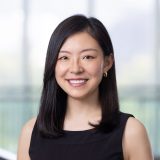 Intraday disclosure timing deviations and their implications for financial reporting