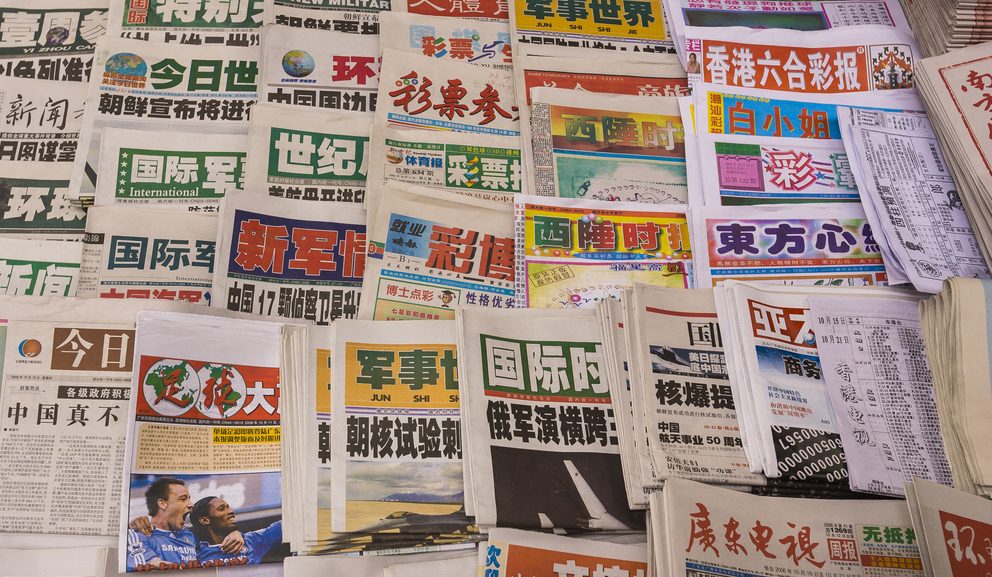 Given that the media in China is controlled by the government, will conglomeration of the media industry ultimately yield a more diverse and transparent media?

Do investors react differently to corporate news published in party papers or business publications? Given that the media in China is controlled by the government, will conglomeration of the media industry ultimately yield a more diverse and transparent media? These are some of the questions explored in the working paper ‘Political Bias of Corporate News in China: Role of Commercialization and Conglomeration Reforms’, the first paper looking into the consequence of the media reform in China.

“Corporate news from an official newspaper is more likely to be positive but less reliable. Relatively, corporate news published in a professional paper is much more reliable, which implies a stronger impact on the stock price,” says Prof. Zhang.

The paper looked at the consequence of two serial media reforms implemented within China, that is, the commercialization of newspapers and the conglomeration of newspapers, a move to bundle them within larger regional media groups. Specifically, the paper investigated whether the business newspapers become less biased after commercialization and whether diversity of corporate news increases after conglomeration. If the reform is effective, the market should react differently to news articles published in official and business newspapers. The paper also finds evidence for that.

To conduct their research, the team rely on machine learning techniques to examine some 1.77 million domestic Chinese newspaper articles covering China’s listed companies between 2000 and 2010. To measure the political bias, the paper constructs the tones as well as the political tagging for each news articles through textual analysis.

In areas under tighter state control – Beijing for instance – reports contained more political bias than they did in the more market-oriented Guangdong province. – Prof. Zhang Tianyu

The Reforms of Chinese Media

China began to liberalize its press in the 1980s; this has resulted in a proliferation of commercially driven business focused newspapers. Unlike their state-funded counterparts, these newspapers receive no government subsidies and rely upon subscriptions and advertising revenue. According to the researchers, the newspapers in China serve as mouthpieces of Chinese Communist Party or government prior to the reform.

Beginning in 1996, the government also made a move to regroup both the commercial and state-run local newspapers under one roof to create geographically-based media conglomerates. The process began with the formation of the Guangzhou Daily News Group; now 38 such news groups exist across China. These reforms bring state-funded government mouthpieces under the same roof as commercial newspapers.

“This is the ‘double-track’ reform strategy that China government prefers,” says Prof Zhang. “We’ve seen it in other markets, such as double exchange rate in currency market, and double-track price in commodity market. Now the government put two types of media – the professionally-run financial papers alongside the mouthpiece of the government. It’s about balance,” he says.

China’s state owned media serves a dual purpose – as the government’s mouthpiece and as a market-oriented information institution. “These missions require a careful balance between political and commercial objectives, which are often in conflict with each other,” he adds.

When Asian stocks crashed in 1997, both markets and the Chinese government came out in favour of more transparency within the market, and in the reporting of it in the media. Some publications were able to act as watchdogs for financial markets. For example, the financial magazine Caijing《財經》has exposed incidence of corruption and fraud around the turn of the millennium.

However, have these media reforms resulted in a more or less independent press? While readers expect commercial papers to have greater autonomy, can they still be expected to report objectively on state owned enterprises for example, when after all, the government still retains ultimate control of the appointment of editorial staff, and indirectly, ownership of the papers themselves?

The findings are revealing. China’s newspaper reforms – the conglomeration and commercialization – have boosted the diversity of news reported by state controlled newspapers. Unsurprisingly, business newspapers are less politically biased than official newspapers. But these differences are more pronounced for business papers after the establishment of media groups: business papers within media conglomerations appear more diverse, less politically biased than their free-standing counterparts.

“Different media play different roles within the same group,” explains Prof. Zhang. “Our research is the first to show this difference.”

Researchers also found that in areas under tighter state control – Beijing for instance – reports contained more political bias than they did in the more market-oriented Guangdong province. “We found newspapers in Guangdong are more professional,” he says.

And it all comes back to balance. With its mix of official and business publications, a media conglomerate can serves two editorial needs – publishing both for the state and the market. “For instance, if you say something critical here (i.e., in a financial paper), that’s okay because you already say something ‘good’ there (i.e., in a party paper within the same group). This kind of balance is at the heart of Chinese culture,” he says.

The Effect of Individual Auditors on Audit Quality: Evidence from China

The researchers found that reports in business papers are more likely to affect the share price of a company than if the news was published in an official paper. In other words, news articles published in a conglomerated finance paper have more impact upon share price than news from a free-standing paper.

The research shows that the reform of the media industry, which introduces market incentives, can enrich corporate journalism, without the state being forced to relinquish control of underlying news organizations, say the authors. And these findings are significant for emerging economies under autocratic governments which are wrestling with reform of a state-controlled media.

While researchers did not include social media in their research, they acknowledge the prominence of channels such as Weibo, WeChat and informal blogs held in the public eye. Despite state controls, the internet is now China’s most popular source of news – significant considering that individual investors – who glean information and tips online – are responsible, according to Thomson Reuters, for some 85 percent of share transactions. But news generated by social media is not always trusted, says Prof Zhang. While some rumours do originate from internet sources alone, most news circulated on the internet is still generated by more traditional media such as newspapers. “Credibility is still a big constraint for online news. Traditional newspapers still have the upper hand,” he says.

External pressures will drive Chinese media to greater levels of professionalism, Prof. Zhang believes. In addition to evidence presented in the paper, the authors also investigated overseas media in Chinese, including Hong Kong, Singapore and Taiwan, which have all revealed less political bias than their mainland counterparts. “These higher professional standards will spill over to China,” he says. “Likewise, the advent of the Shanghai-Hong Kong Stock Connect which has opened investment channel between mainland China and external investors will drive further demand for more professional information intermediaries.”

“This paper has thrown up many potential avenues of future research,” says Prof. Zhang. “Do less bias and more information actually improve operations for China’s markets? How do these reports compare with what has been published outside China? Has reporting improved only for state owned enterprises? What else, if anything, limits the role of Chinese media to report freely? And how does the subject matter of an article affect share price? These questions would inform our next steps,” he says.

Political Bias of Corporate News in China: Role of Commercialization and Conglomeration Reforms