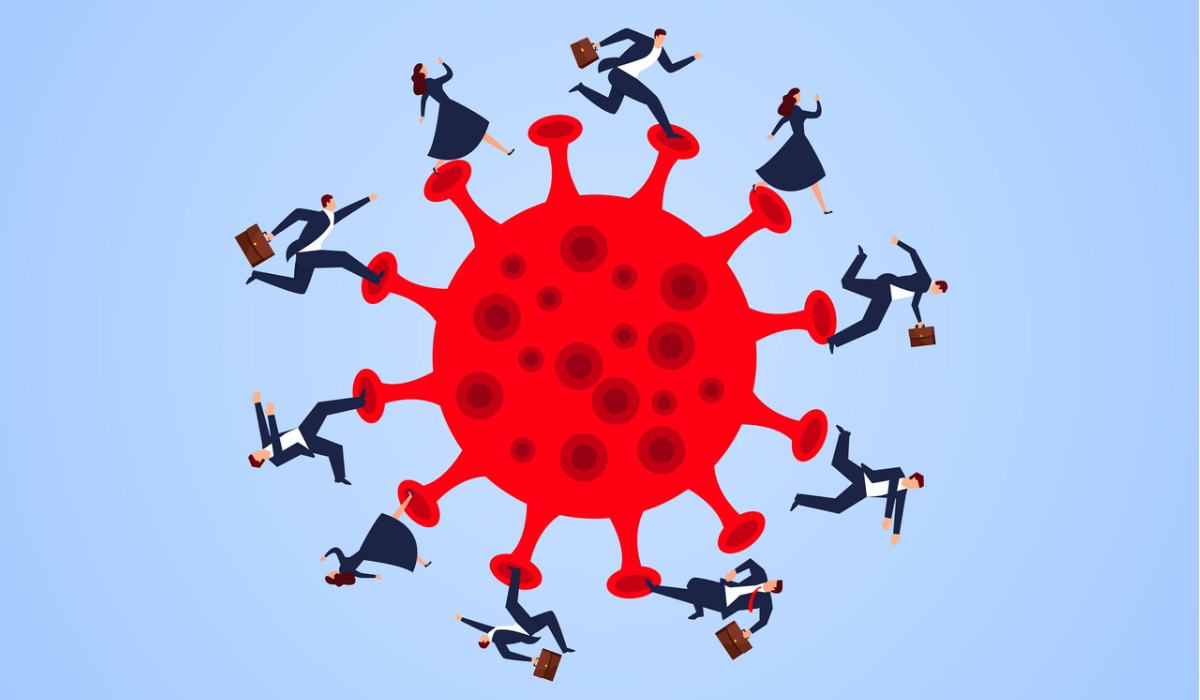 The COVID-19 outbreak currently sweeping around the globe with deadly results will create hardships for a good proportion of businesses in China while generating new opportunities for others, says Jing Wu, Assistant Professor at The Chinese University of Hong Kong’s Department of Decision Sciences and Managerial Economics.

While the virus, which has sickened so far over 200,000 people and killed more than 8,000, has often been compared to the 2003 SARS outbreak; which infected 8,000 people and killing 774 around the world; such comparisons may only tell part of the story, he says.

In 2003, SARS wiped 0.5 percentage points off China’s GDP, but the rest of the Asia Pacific region resumed its economic growth only after a short sell-off in the stock market. In contrast, Prof. Wu warns the economic impact of COVID-19 will likely reverberate globally, with China not only occupying a larger proportion of current world trade – its share of the global economy has grown to 16 percent today compared to just 4 percent back then, and with world supply chains now intricately intertwined with what is the world’s second largest economy. 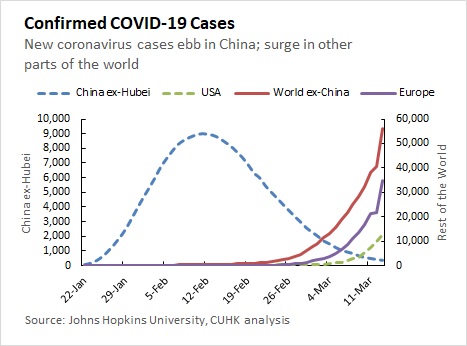 According to the International Monetary Fund, China alone was expected to account for 39 percent of global economic growth. “A 0.5 percentage point reduction in Chinese growth will likely be transmitted and magnified globally. Of course, whether the impact on China’s GDP will be only 0.5 percent again this time around depends how quickly is it brought under control and the speed of economic recovery,” says Prof. Wu.

Looking at specific industries, Prof. Wu notes that, like SARS, COVID-19 is expected to be felt most quickly in terms of consumer spending. During SARS, the industries affected most were service-related, such as in retailing, catering, entertainment, and tourism – sectors all sensitive to consumer confidence which only slowly returned, he says.

Other industries that are likely to be affected by COVID-19 include energy, airlines, financial insurance, and real estate. On the other hand, companies in durable goods, telecommunications, and utilities are expected to weather the current crisis relatively unscathed.

In the service sector, those hardest hit will be in physical retailing, which are facing near-zero revenues even while struggling under persistent rent and labour costs. Prof. Wu notes comments by Xibei Restaurant Group, a chain that operates more than 400 restaurants in 60 cities in China, that the company is facing the prospect of running out of cash flow in the next three months. Other high profile brands including Nike, Adidas, McDonald’s, and Starbucks have also  announced temporary shuttering of at least half of stores in China.

“Those physical stores that have not shuttered entirely have been run on shorter business hours. This shows the pressure that the retail and catering industries are under,” he says.

Online, prospects look less grim. “One of the far-reaching effects of SARS was the rise of Chinese e-commerce, such as Taobao. Similarly, online shopping, online takeaway and delivery, and online shopping of fresh produce will see growth opportunities this year,” Prof. Wu says, adding that the logistics industry, especially express delivery, will also see increased demand during the period.

Another sector that could benefit is online video and mobile games, which may see increased demand with cooped up consumers turning to them to stay entertained until at least the epidemic abates. Prof. Wu cites brokerage research into the Honor of Kings online game published by Tencent, which saw the number of players jump to over 90 million during Chinese New Year, with each player devoting on average 194 minutes – more than three hours – per day. On Chinese New Year’s Eve, the game netted more than 2 billion Chinese yuan for the company, breaking the previous daily record of 1.3 billion yuan on the last day of 2019.

However, the majority of businesses will be under stress. To contain the outbreak, the government suspended a good proportion of economic activity, causing companies to delay production and the resumption of work. Of particular concern is its impact on small and medium enterprises, or SMEs, Prof. Wu says, adding that such businesses typically subsist on low profit margins and even small sales losses will have a big impact.

“Even for companies which have more room to maneuver, they may become more frugal in the coming period, meaning that investments will slow,” he says. In China, SMEs account for two-thirds of GDP, 80 percent of urban employment and more than 50 percent of taxes.

“The government can help these companies in many financial and fiscal aspects, such as the continuous introduction of proactive monetary and fiscal policies to stimulate the economy, flexible or delayed collection of social security payments, and loosening of loan repayment terms,” Prof. Wu says, adding that many real estate companies have also reduced rents for commercial tenants by as much as several billion yuan. “These long-term approaches are very beneficial to the economic recovery,” he adds.

Another sector to watch carefully is manufacturing, with intermediate products – components and parts which are used to produce finished products – constituting 17 percent of Chinese exports, according to World Bank data. This includes electronic parts, automotive components and steel. In 2018, companies in the U.S. alone bought US$37.3 billion in intermediate goods from China.

Pros and Cons of Procurement Outsourcing in China

Wuhan itself is a major nerve center of the global supply chain. For example, the city is home to a number of component manufacturers that feed the U.S. computer giant Apple, and there is market speculation that a new version of its popular AirPods may be delayed and that shipments of iPhones may be reduced.

The province of Hubei, of which Wuhan is the capital of, is also an important production hub for the auto industry, producing much of the lighting, electrical and braking components that go into finished cars and trucks. The province plays host to noted automakers including Dongfeng Motors, General Motors, Honda and Renault.

Elsewhere in the country, manufacturers have also been facing delays, including Airbus’s production line in Tianjian, which produces six A320 aircrafts each month, which was previously suspended only to be gradually reopened in mid-February.

Pain Ahead for the U.S. Economy

Elsewhere in the world, Prof. Wu sees pain ahead for the U.S. stock market. On March 16, the Dow Jones Industrial Index suffered its worst drop since the “Black Monday” market crash in 1987, despite steps by the Federal Reserve to cut benchmark interest rates to near zero in addition to measures designed to stabilize markets.

The S&P 500 dropped 12 percent to below 2,400 points. Prof. Wu notes that the market is currently caught in a negative feedback loop. A decline in the asset markets has led to tighter financial conditions, this in turn has led to economic weakness, and then to further asset market declines.

“Only when this negative feedback cycle is completely interrupted will the U.S. stock market really reach its lowest point, so the S&P index should be in a process of continuous decline and bottom detection in the next few weeks,” he says.

He warns that the three big “ifs” impacting the U.S. economy – the inability of the government to curb the epidemic, the possibility that the number of confirmed virus cases skyrocket, and the enactment of city lockdowns like Wuhan – may become reality, leading investors to realise that the virus will have a far greater impact on the U.S. economy than expected, and in turn leading to a significantly lower bottom for the S&P Index than the current level of 2,400 points.

To interrupt this negative feedback loop, he suggests two potential measures. One is to bring the number of COVID-19 cases within the U.S. under control soon, and the other is for the government to launch a very large fiscal stimulus package similar to China in the magnitude of a hundred billion U.S. dollars.

“Of the two solutions, the former requires the American society to actively face the epidemic and treat patients, so that the peak appears as soon as possible. For the latter, the U.S. may be unwilling to follow a Chinese-style stimulus plan. At the same time, the two-party cooperation will be more delicate and complicated in the election year,” Prof. Wu says.